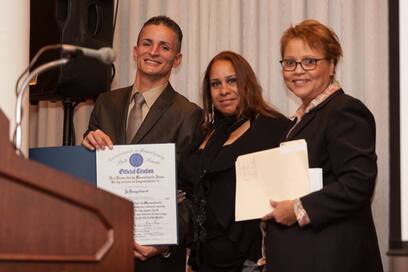 Ritchie Gonzalez, Elizabeth Gonzalez, and
​Director Richie Gonzalez started this outreach effort in 2010, with just a card table and some bagged lunches. He returned to the very spot where he used to struggle himself with substance use disorder. He knew that now that he had found his faith and sobriety that he had to share it with his community. Now along with countless volunteers, he is cooking and serving a hot meal to an average of 250 people per week. Richie and Elizabeth Gonzalez are incredible people of faith and all of their program needs have always been met through private donations. They do have plans for the future which include a permanent office space and they would eventually like to open a housing program.
​
Net of Compassion is a collaborative effort of many community groups founded and driven by a highly committed citizen of Worcester, Massachusetts. After overcoming his long battle with homelessness and substance use disorder, Director Richard Gonzalez now reaches out to the homeless, addicted, and under served in our community. Ritchie, Elizabeth, and a dedicated group of volunteers at Net of Compassion tirelessly work on the streets of Worcester to seek out  citizens with the most need.
​
Since its inception in 2010, Net of Compassion has been providing an opportunity for many volunteer groups and people of faith to come together to save the lives of the city’s most vulnerable population. This community organization is overseen and driven by a highly committed man of God, who overcame his own lifelong battle with substance abuse. Director Richie Gonzalez and his team now run an extensive outreach effort in Worcester, Massachusetts. Clients include men and women struggling with substance use disorder, prostitution, homelessness and those living with mental illness symptoms. The volunteers of Net of Compassion help by forming a safety net of support for these folks, providing peer support, food, clothing, intensive recovery counseling and many other services. Mr. Gonzalez and his wife Elizabeth are also ordained ministers, offering spiritual guidance and times of prayer during Net of Compassion outreach activities. Net of Compassion is truly a web of many talented individuals coming together for the people of the street. Through relationships with Richie and his team, many now have the opportunity to restore their faith and get reconnected to a healthy and productive life.

So I went down to the potter’s house and saw him working with clay at the wheel. He was making a pot from clay. But there was something wrong with the pot. So the potter used that clay to make another pot. With his hands he shaped the pot the way he wanted it to be. Then this message from the Lord came to me: “Family of Israel, you know that I can do the same thing with you. You are like the clay in the potter’s hands, and I am the potter. This message is from the Lord.” Jeremiah 18:3-6
DONATE